Sanctuary of the Crowned Virgin 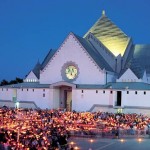 Sanctuary of the Crowned Virgin

A high bell tower of 57 meters makes the sanctuary of the Crowned Virgin visible from afar, a few kilometers from Foggia.

Over the centuries many visitors have come to the Crowned Virgin to implore graces or to thank her for her intercession.

The extraordinary complex of the Sanctuary covers thirteen hectares and consists of the holy temple, with planimetric scheme in the form of a Greek cross and with a single compartment, the side reserved for fathers, the custodians of the sanctuary, the impressive bell tower 57 meters high, the museum, the theatre and the house of the Pilgrim.

It is the most important Marian Sanctuary of the whole Gargano.

Internally, the Sanctuary hold the miraculous wooden statue of the Black Madonna and the sacred wood of oak, where according to legend, the statue was found.

According to tradition, it all begins on the last Saturday of April in the year 1001, when the Count of Ariano Irpino, one of the lords of Apulia (whose name was unknown), after a day of hunting, was caught in the dark, in a cottage in the forest near the river Cervaro.

At night, the Count attracted by the vivid glow of a light, reached the foot of a tree, on which there was a mysterious Lady, who showed him a statue resting in the branches of an oak tree.

At the same time, a farmer, a certain Strazzacappa that was going to work with his oxen, at the sight of the Lady, realized immediately that he was in the presence of the Blessed Virgin, so he took a cauldron, the ration of olive oil that should have lasted him for the whole month and after making ​​a crude wick, he lit it in honour of the Madonna.

The noble Count of Ariano Irpino built a chapel which became a Sanctuary.

Numerous groups of farmers and herdsmen increased more and more. In addition there were also the pilgrims who went to Monte Sant'Angelo to the great Sanctuary of the Archangel Michael.

Because of this incessant flow of the worshippers, it was decided to expand the Sanctuary.

Also pilgrims were fewer because of the absence of services; often bishops denounced the state of confusion and decay. The first decades of the twentieth century were characterised by the diligent work of the bishops and of some city administrators extremely concerned about the future of the ancient sanctuary.

Among these we have to remember two mayors of Foggia, Alberto Perrone and Gaetano Postiglione.

Finally, in 1939 the sanctuary came back under the full jurisdiction of the ecclesiastical authorities.

It was Bishop Monsignor Fortunato Maria Farina who brought the Sanctuary of the Crowned Virgin to its original function of House of God and in 1950 he entrusted the custody of the Sanctuary to the Sons of Divine Providence, founded by Don Luigi Orione (now St. Luigi Orione).

The life of the sanctuary grew continuously. In 1953 it was decided to expand it again and in 1965 the new temple with its tall bell tower became a reality. 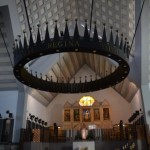 In the sanctuary before venerating the ancient statue of the Madonna, and imploring graces and comfort, devotees and pilgrims anoint their forehead with faith and devotion making the sign of the cross with the holy oil that is in the appropriate chapel of the anointing.

‘The oil of the Crowned Virgin’ is blessed olive oil in a container located in the chapel of the anointing and even placed in special vials so the pilgrims could take it with devotion to the sick, to relatives and friends. It draws its origin from the prodigy of the lamp that the pastor Strazzacappa began to flare up for devotion on the branch of the oak, the day of the apparition of Our Lady.

According to the tradition that flame always burned and the oil was not consumed.

There are many testimonies (men and women who were in a difficult moment because of their illness, for spiritual reasons or were discouraged or depressed), and who have obtained physical and spiritual effects through the anointing of this oil reciting “the Prayer of the anointing”.

O God, Heavenly Father, who spread your gifts through the Holy Spirit, in memory of the baptismal anointing, let us that we receive now with sincere devotion, the anointing with the holy oil of the lamp that the pastor Strazzacappa began to burn on the tree for the Virgin the Crowned.

O God, make that our soul will never lack the oil of Faith, the anointing of the sure Hope and the flame of holy Charity. We pray for the intercession of Mary, Mother of Jesus, Christ your Son and our Lord, who lives and reigns with you for ever and ever. Amen!

The House of the pilgrim

It is a cosy and modern structure that the Sanctuary offers many pilgrims.

It is open all year. All rooms have services and air conditioning.

The house of the Pilgrim has fifty-eight beds divided into nine single rooms, eighteen doubles, three triples and one room with four beds.

It is also equipped to accommodate the disabled.

You can also benefit of:

some salons and halls for conferences and groups of study;

a building with 110 beds used as a youth hostel.

It offers the following possibilities:

-half board or full board.

In relation to the images about the Crowned Virgin of Foggia, five types of images were passed on:

the oak tree with the statue on the foliage, and at its feet the farmer with his oxen;

images showing only the noble hunter with his dogs, at the feet of the oak;

images showing the noble hunter and the farmer;

images depicting only the Virgin;

images showing the “two Virgins”, side by side.

The Virgin seems to have appeared leaving a Statue in order to worship her and build a church.