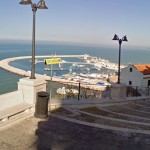 It was founded around 1284 B.C. by the Cretans and then inhabited by Greeks who founded the ancient city of RSPP and Rodii Argives in the eighth century B.C.

The Rodii Argives colonized the coasts.

Like the other countries of Rodi Garganico, in the course of its history, it was a theatre to hard battles. In 1240 the Venetians looted it and then attacked it to punish it for being allied to Frederick II; in 1500 it was plundered by the French and in 1600 the Turks attempted to seize it several times. In 1800 Giacchino Murat stayed here, after the fall of Napoleon.

It was an ancient Cretan and Greek colony, and later, in Roman times, one can find it under the name of "Portus Garnae".

It preserves some towers that tell about the sieges and the looting by the Goths and Venetians.

In the area under the castle the defensive walls of the port are still visible.

The defence of the port was important for centuries because the sea was the only road to the town.

Rodi Garganico is an ancient maritime village near the Adriatic Sea, but its main characteristic is its position: it is situated on a high rocky cliff surrounded by luxurious vegetation composed mainly of citrus and olive groves. 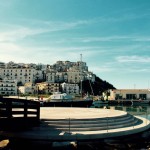 The narrow streets give away its Greek origins and the original medieval atmosphere is maintained thanks to the stone portals and the noble palaces with beautiful eaves .

‘Lido del Sole’ beach in recent years has become one of the most popular bathing destinations of the Gargano and a great tourist attraction centre.

Its kilometre long beach is characterized by a fine golden sand and a crystalline, blue and clear sea.

The town was defended by solid walls fitted with square, cylindrical or polygonal shaped towers, while in the corner of the walls the castle dominated in a strategic position towards the sea.

There is no clear information on the origins of the castle, but it is certain that by 1461 it already existed, because Ferdinand of Aragon resided in that castle. According to some sources, the thirteenth-century nucleus was later enlarged and transformed.

In 1806, the castle was sold to different owners who renovated it in their own way.

It is the principal church of the town which was built around the seventeenth century.

Inside the church there is a wooden statue dating back to 1681 of San Christopher.

Near the church a tall bell tower about 20 meters stands; it was built in several phases over the centuries.

Its bell tower was initially born as a watchtower and in later times an octagonal drum and an oriental dome, culminating in a spire have been added.

It served as the watch of the community.

The bells were used to signal the approach of religious services, but even to call the people who were in the fields reminding them about lunchtime and dinnertime.

THE SHRINE OF THE ‘MADONNA DELLA LIBERA’

It is located in the centre of Rodi and keeps the icon of the ‘Madonna della Libera’, a work dating back to 1400/1450 that depicts the Madonna sitting with the baby Jesus in the womb, while he is playing with a dove.

The detail of the cross on the hand of the Virgin Mary certainly identifies and confirms her role in the history of the salvation. The sanctuary is located in the centre of Rodi, but the Sanctuary was once located far from the walls of the town. The style of the whole structure is in Apulian Baroque and probably dates back to the early decades of the eighteenth century.

The church has been repeatedly renovated and expanded, and it has numerous other paintings, attributed to the Neapolitan school and the Venetian Gothic school, although the name of the author remains unknown because the paintings are not signed.

The painting of the ‘Madonna della Libera’ is surrounded by a particular story full of mystery and beliefs that some legends have handed down.

One of these legends has it that after the conquest of Constantinople by the Turks, some Venetian ships returning to Italy recovered statues and sacred images. But during their return, when they arrived next to the coast of Rodi Garganico, one of these ships remained incomprehensibly immobile although the sails were swollen and the wind was blowing in their favour.

The commander left the ship in hope of finding the solution to the problem; he noted with surprise that during the days passed on the land, the people gathered around an image of the Virgin Mary who was saved at Constantinople and laid on a rock. When he ordered to bring the image on board it, miraculously kept returning to the same point. So he understood that the ship was immobile because it was a will of the Mother of God, who wished to remain in that place and he decided to give this image called "Our Lady of the Dove" to the population of Rodi.

THE CHURCH OF THE HOLY CROSS

It was one of the first churches of the town, damaged by the earthquake of 1679 and was renovated in 1695. It contains the work of wood that every Good Friday is brought in procession. Presumably it is a work that dates back to 1600 and is attributable to a Neapolitan art school, which was very influential at that time.

THE CHURCH OF SANTA BARBARA

It is located outside the town walls.

The origin of the church is evidenced by a writing of 1091, when it became a dependency of the abbey of Benevento.

Later it was assigned to the Knights of Malta and was restored only in 1645. It was enriched with a painting depicting Santa Barbara, to whom the church was dedicated.

The last renovation dates back to 2009 in which one tried to recover a part of the facade that suddenly collapsed.

Currently the state of conservation of the church is very critical.

THE CHURCH OF SAN PIETRO

The church was probably part of a monastery built around 1216 and 1221, in the occasion of the trip of Saint Francis of Assisi, who went to the cave of St. Michael in Monte Sant'Angelo. It is located in a small square of the village and the architectural structures added over the centuries are proof of a continuous work of enlargement of the time and of a changing architecture of the complex.

THE CHURCH OF THE HOLY SPIRIT

The church of the Holy Spirit is part of the first Capuchin monastery of the Gargano. The complex was built in 1538 following the classical structure of the monasteries, full of baroque art elements and enriched by a painting attributed to Mazzaroppi dating back to 1550/1620.

In the church there are three side chapels enhanced by numerous reliefs with the figures of the Saints.

And finally the importance of the entire vault of the church is well evident. It is entirely frescoed with the paintings of the Holy Spirit.

THE CONVENT OF THE HOLY SPIRIT

It belongs to the Order of Minor Capuchins Friars and it is totally immersed in the green of the olive and citrus trees. It is located on a high hill.

Its origins date back to 1538 and it is one of the oldest convents in the whole Province of Minor Capuchins Friars of Sant’Angelo and Padre Pio.

In the past, the convent was a novitiate place for the people who undertook the journey to the consecrated life.

Next to the convent there is a beautiful church dating back to 1678 which was dedicated to the Holy Spirit. In the church there are exceptional frescoes of the prophets Jeremiah, Ezekiel, Daniel and Isaiah and three ancient altars of the Baroque style all realised by Paolo Gamba.

Inside the church, above the main altar, there is large Canvas of Pentecost that dates back to the sixteenth century and it is attributed to Mazzaroppi (1550-1620). It is made of wood and has a Baroque style. It depicts the Virgin Mary surrounded by the Apostles on which the Holy Spirit is descending. Its dimensions are 3.20 meters by 2.60 meters. St. Francis (founder of the Order) and St. Michael (patron of Gargano) are the two foreground figures and they are usually put together in the iconographic choices of the Capuchins of the Gargano.

At the centre, the Virgin is represented with a serene air as she looks down on the prayer book.

The canvas was in danger of being stolen because of the events of the abandonment of the convent; but it is now kept in the Provincial Curia of the Minor Friars Capuchins of Foggia after being restored by the artists of Bari. But in the monastery you can see a copy of the same work. An ancient tradition of the people of Rodi for the last Saturday of April is to spend a pleasant day in the green of nature, enriched with abundant lunches and traditional songs. Recently this convent was renovated. Now it is open to the public and every Saturday Holy Mass is celebrated.  And, if someone wants to visit, a guardian will open the doors so that one can discover the beauty of the convento. Some lands and houses on the oasis of citrus were owned by the convent, but then they became the property of a merchant of Rodi, who lived in the nineteenth century: his name was Carmine Carbone. The baroque altars of the three side chapels, the bas-reliefs depicting the figures of Saints and the ceiling of the church completely decorated with antique frescoes depicting the Holy Spirit are very important. There,  a precious bell melted at Venice in 1782 is still preserved.