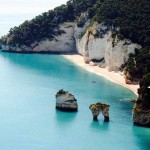 Zaiana beach is located about 5 km from Peschici towards Vieste. It is located in the picturesque homonymous bay. It is a soft golden beach, characterized by a coastline of about 200 meters between high cliffs covered with woods.

The sea is very beautiful: blue, crystalline and transparent, with a sloping sandy seabed, ideal for swimming. But in the windy days, the water is affected by waves.

The beach transforms into a disco in the evening and many youmg people attend. You need to take a long trail of steps leading down the cliff to reach the beach Zaiana.

The coast is almost entirely equipped with sunbeds and umbrellas. Zaiana is adjacent to the Bay of Manaccora.

Manaccora beach is located about six km from the centre of Peschici. It is a soft golden beach, characterized by a large coastline, several kilometres long and it is bordered by Mediterranean vegetation.

It is an ideal beach for swimming and bathing, the sea is blue, crystalline and transparent, with a sloping sandy seabed. This beach is ideal for long walks on the boot topping, walks in nature, and even to visit many “trabucchi” not far from Manaccora, which are scattered on the rocks.

Three camps are arranged near the beach.

Peschici beach has been repeatedly awarded the Blue Flag. It is located just below the imposing karst rock on which the historical centre of Peschici is perched. It is a beautiful, large and long beach of soft golden sand. The sea is very beautiful, crystalline and transparent, with a sloping sandy seabed, ideal for swimming and bathing.

The marina is near the well-equipped beach and with a good chance to practice different water sports, while on the sea coastline there is a long jetty for boats.

Calalunga beach of Peschici with its sloping sandy seabed, is ideal for swimming and bathing. It is located about seven kilometers from Peschici and 16 km from Vieste, close to the beautiful National Park of Gargano. It is a 300 meters long beautiful beach of soft golden sand,. The coastline is very large and it is all surrounded by green forests. It is also bathed by a beautiful, crystalline and transparent sea.

AN OASIS OF GREEN AROUND VIESTE: THE UMBRA FOREST

The Umbra forest is the green lung of the Gargano National Park and also a treasure chest where scholars and lovers of the flora can admire the precious pearls of this area.

Its vegetation is very twisted and tangled: twigs, ferns, shrubs and with some streets which hardly break through. Its trees are enormous reaching impressive heights and the daylight penetrates with difficulty from the tangle of branches.

It covers an area of about 11,000 hectares and includes the woods of Sfilze and Ginestra woods, where among pines and secular beech trees, there are different types of trees: laurels, white and black hornbeams, little hornbeams, chestnuts, oaks, mountain and field elms, oaks, lindens and these ancient yews that are probably among the oldest trees in Italy . It is estimated that they are about two thousand years old and the trunk of some specimens exceed two meters in diameter.

In 1564 it was decided to build ten towers in order to face the constant threats of attacks by the Saracen pirates, corresponding to the strategic places of the Gargano coast. Almost all towers are connected visually to each other. The towers have sides of approximately 11 meters and a height of about 12 meters.

They were built with visible blocks of stone and have a square plan, a pyramidal structure, very small windows, and an entrance on the wall facing upstream.

The building is on two floors with a fortified tower. The ground floor was used as a warehouse while the upper floor as a house. The walls have a thickness at the base of about two meters and are made ​​of local stone.

Next to Vieste you find:

San Felice Tower, from which you can admire the natural arch.

Gattarella Tower in the homonymous resort

Sfinale Tower (between Vieste and Peschici)

Under the homonymous tip, the cave of Manaccora is one of the largest caverns in the north of the Gargano coast. It is an authentic Italian strength of the recent Bronze Age (12th century b.c.). It overlooks the beautiful natural scenery on the north side of the bay, which is situated 6 km from Peschici, on the coastal road to Vieste. It  is an undervalued and underestimated "treasure" for the tourists and residents.

The cave can be reached by swimming to the bottom of the beach of Bay of Manaccora. Along its walls there are numerous cavities intended for funerary purposes.

During the excavations of 1990 some bronze pins, daggers, swords, pieces of jewellery glasses (decorations of clothes) were found. Unfortunately their location is unknown and they have probably been abandoned in some basement of the Ministry of Culture.