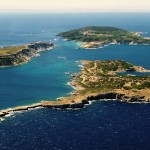 The Tremiti Islands are located in the middle of the Adriatic Sea and they are part of the Gargano National Park. The Tremiti Islands which constitute a marine natural reserve, are filled with beautiful rocks, crags, caves, coves and stacks.

The archipelago consists of the islands San Nicola, San Domino (covered by woods and Mediterranean forest), Capraia (also known as Caprara or Capperaia), Pianosa and two inaccessible rocks: Cretaccio (with a crescent-shaped), and Vecchia (with its black and wrinkled rock): both of which are deserted.

The Tremiti Islands can be reached thanks to the various confined ports, but also from Vieste, Rodi Garganico, Termoli and Capoiale.

From a historical point of view, the Tremiti Islands are famous for housing the first Benedictine religious centre of the area. Later a monastery was built: the Abbey of Santa Maria a Mare, which has long been inhabited by monks and famous people connected with the Church.

The abbey was fortified for future attacks after that the pirate Almogavaro plundered the monastery and killed the monks. During the fascist period, the islands were a place of confinement for homosexuals.

THE ISLAND OF SAN NICOLA

Its name comes from that of a hermit. The Abbey of Santa Maria a Mare is situated on this long narrow island overlooking the sea.

The Abbey of Santa Maria a Mare is the only surviving building of the medieval complex which was transformed through the ages.

The fifteenth-century facade was modified and altered over the centuries, while the plan of the church has not changed and today it is the most respectable monument of the Tremiti Islands, with a rectangular shape, three naves and a double ambulatory.

It was built entirely with a coating of Swabian pearls, a white cut stone. The current dome of the nave has been replaced by a painted wooden ceiling.

You can also see the remains of a mosaic floor of the eleventh and twelfth century, a Venetian altarpiece, made of carved and gilded wood, dating from the middle of the fifteenth century, of the Gothic Line.

Through a door that is to the right of the church, you can go to the first cloister; it is the oldest with vaulted ceilings, stone pillars and arches that are near to the left aisle of the church. In the second cloister you can admire the wonderful portico with its twenty-six arches supported by ionic columns that reinforce the vaults that cover the portico.

The island of San Domino gets its name from the bishop and martyr San Domino, to which a small church was consecrated  together with St. James. It is the largest island in the archipelago and it is full of caves, coves and rock pools. It covers about 208 hectares. In the island of San Domino there is only one sandy beach (Cala delle Arene) which has a low seabed.

It is the island with the largest number of accommodations and services. On the southern side of the island there is the ‘Grotta Viola’, and is one of the many wonders of the island which takes its name for the many purple wild flowers present.

ISLAND OF CAPRAIA OR CAPPERAIA

The island of Capraia is an uninhabited island, which covers 45 hectares. It can be reached by rafts or boats. There are only rabbits.

In the central part of the island the flora is composed of caper plants, (they give the name Capperaia to  the island), bushes of mastic (with its strong resinous odour), cardoons and juniper bushes.

The island’s wealth is in its seabed. The underwater walls of the rocks are covered with sponges and algae, while the seabed is rich in species of precious fish.

On this island, near the ‘Cala dei Scoglietti’, you can see the submerged statue of St. Pio, about 4 meters high, surrounded by a myriad of colourful fish. It was donated by the Region of Puglia.

The statue is placed at a depth of about 15 metres with the open arms towards the tip of the island of San Nicola, where the cemetery is located.

Today, much of the island is part of the "Zone B" of the marine reserve of the Tremiti.

The island of Pianosa is an island uninhabited with almost no vegetation. It is smaller than the other islands (13 hectares). It is called Pianosa for the shape of the island, which is low and flat. During strong storms, the waves pass from one side to the other.

Sailing in these areas is quite dangerous because there is a low seabed.

On this island there are cacti and caper plants. The only animals that live here are rodents, snakes, wild rabbits and hawks. The sea around the island is full of beautiful seabed.

It seems to be in an earthly paradise. Since 1989 it is an Integral Marine Reserve, so the transit, mooring, bathing and fishing have been forbidden. Here, in fact, many marine species have the possibility to reproduce. They populate the south-central area of the Adriatic Sea. It is the eastern border of the Italia. Four large illuminated buoys mark the beginning of the marine reserve. The National Park of Gargano manages this natural heritage. Its waters are full of fragments of ceramics and Roman amphora, which were used for the great traffic of Roman ships from the imperial period.