Mattinata center and its beaches 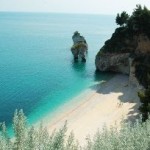 Mattinata is about eighteen kilometers from Monte Sant'Angelo and it is known for housing the shrine of St. Michael the Archangel. It has also been a destination for Christian worshippers since the sixth century. It is 38 km from the town of San Giovanni Rotondo.

There aren’t many traces of its past because the Apulian coast was attacked by Saracen pirates, and even Mattinata was sacked and burned down like the other coastal towns.

Many predators settled over Monte Matino, today known as Monte Saraceno, which took its name from the Saracen pirates and contains now the earliest evidence of the past about Mattinata.

You can see many finds kept in the museum of Mattinata and Manfredonia.

They were recovered from the 500 graves of the necropolis of Monte Saraceno.

The graves have the shape of an uterus and they evoke the ritual of returning to the prenatal life. They were covered with stone plates, known as "stele daune", surrounded by heads, shields and ‘falli’, according to the importance of the decedent.

The dead were huddled in these graves with their most cherished objects.

At the foot of the hill Coppa di Principe, in the locality Agnuli, near the marina, there are the remains of a Roman villa.

The walls that enhance the orderly masonry technique of the small rhomboids bricks placed in the reticulum and the herring-bone floors are very precious. Surrounded by woods, ancient olive trees and almond trees, Mattinata lies on two hills (Castelluccio and Coppa della Madonna). Its coast is characterized by white rock, in stark contrast to the pine forests and olive groves.

In the old town, best known as Junno (it is a smaller reproduction of the most famous old town of Monte Sant'Angelo, known with the same name), you can admire the oldest houses called 'the pagghiere', or barns, which date back to the mid-eighteenth century. They are farm houses built with limestone stone of the area, one on top of the other, where men and animals slept.

In the old town you can also admire the Mantuano Palace, which was  built in 1849 and belongs to one of the most influential families of Mattinata. It has been recently restored. As a memory of the past, it preserves the frame of the front door, which is now used as a public library.

The Barretta Palace or the Giordano Palace dates back to the early twentieth century and it takes its name from the wealthy landowner Giovanni Barretta, who lived there.

Since 4th August, 1955, the palace is now the town’s municipality.

THE “CASINO” OF THE BARONS GAMBADORO

On the left of the provincial road leading to Mattinata marina, below the Asprito street, you can still see what was once the “Casino”: a rural villa with the coat of arms of the noble family of the Barons Gambadoro, a large building constructed in seventeenth century (an inscription dating from 1727 is still visible).

During the final stages of the war, the heir to the throne and Lieutenant General of the Kingdom of Italy were hosted in this house for a few hours (later King of Italy in May 1946). Prince Umberto was visiting the troops stationed there.

Today, it is in poor condition although it is still elegant, with the covers in part intact and interesting architectural elements.

THE BENEDECTINE ABBEY OF THE HOLY TRINITY

Near the summit of Monte Sacro (874 meters above sea level) you can admire the remains of the Benedictine Abbey of the Holy Trinity.

There are still walls, numerous capitals and arches.

The Abbey was composed of an abbey church with three naves and a convent all in Romanesque style. Inside there was a chapel dedicated to St. Michael the Archangel and a baptistery with a square plan.

The Monte Sacro was once known as Monte Dodoneo and was dedicated to Jupiter, the pagan God.

It is said that the bishop of Siponto San Lorenzo Maiorano had a vision of the Archangel Michael. Then the Bishop went to the mountain, broke the idol dedicated to the pagan gods and dedicated the temple to the Holy Trinity.

On this mountain, in May you can admire the wild orchids of the Gargano.

THE CONVENT OF SPERLONGA IN PULSANO

Not far from Mattinata, in the locality Sperlonga, among the olive trees, you can still see the ruins of the ex-convent of St. Stephen, which was built in the eleventh century on the area of an early Christian necropolis of the IV-V century.

Most of the Sansone Collection is exposed in the homonymous pharmacy of Mattinata.

The strange collection is the result of the enormous passion and boundless love of a man for his land. It is a varied collection of historical evidence, including those existing in Italy.

The collection consists of 4000 pieces that encapsulate thousands of years of the history of the Gargano. You can admire some finds from the necropolis of Monte Saraceno, ‘stele’ and pots of the Daunia, ‘appuli’, stone tools and even recent statues belonging to the cribs of the eighteenth century. There is also the Statuary of St. Michael and some objects of goldsmith, laborious designs and high chisel creations from the craft factories of Monte Sant'Angelo.

THE CIVIC, HISTORICAL AND ARCHEOLOGICAL MUSEUM OF MATTINATA

It was founded in 1982 but it was open to the public only in 1990. Inside, you will find objects from tombs, pins, brooches, rings, necklaces and about twenty carved heads dating back to 2000 years ago and discovered on Monte Saraceno.

It is an open-air museum and thanks to a careful restoration, finally, the population has rediscovered the historical and cultural heritage of Mattinata.

In fact, the funerary objects are visible in the territory of origin. They were found during the excavations carried out in the eighties in the necropolis of Monte Saraceno.

After a careful restoration and public exposition, the important aspects of the daily life of the ‘Dauni’ were revealed, illuminating the roots of the past and helping to strengthen their cultural identity.

This incredibly rich historical and archaeological heritage of Mattinata was rediscovered thanks to an exhibition called "Monte Saraceno. The costume of the ‘Dauni’”, organised by the city council.

Although Mattinata is on the Gargano coast, it isn’t located directly on it, but rises above the wooded valley that slopes gently toward the sea.

We will indicate the beaches.

It is the central beach of the country, where there are the main tourist services. Some sections of the beach are free, while others are private.

The beach is composed of a mixture of sand and gravel. The green hilly landscape is immersed in the turquoise blue waters of the Adriatic.

It is located along the provincial road that connects Vieste to Mattinata, near a village with its same name. Indicated by a sign on the coast road, you can reach the sea just turning in direction to the country and the car can be parked along the road. It is also known as the ‘Baia dei Gabbiani’, for the large presence of these birds. There is a pebble beach characterized by the presence of numerous caves carved by the sea in the high coast, about 13 km from Mattinata.

The sand is composed of a mixture of gravel and pebbles, like almost all the beaches of this coast. For most of the summer months, it is completely deserted. The scenery of the white limestone cliffs that surround the beach is amazing. In August, the beach is "invaded" by umbrellas and bathers.

The ‘Baia dei Mergoli’ (so named for the presence of a large colony of blackbirds and lonely sparrows) or the ‘Baia delle Zagare’ (so named for the flower of the orange groves in the area) is located between Mattinata and Vignanotica. It is famous thanks to two stacks called "Arch of Diomede" and "Le forbici", which emerge from the sea and form a crown around this bay. It is also called the ‘Baia dei Faraglioni’ for this spectacle of nature.

Its beach is very popular thanks to the crystal clear water, pine forests, white limestone cliffs and pebbles.

For some years, the bay is only accessible by boats that leave regularly from the port of Mattinata, due to a collapse of boulders. The South beach is accessed through a private staircase, and after obtaining a day pass from the Office of Public Relations of the town of Mattinata; while the North beach is accessed with difficulty through a steep canyon. The bay is bordered by the Biogenetic Natural Reserve of Monte Barone.

It is a small bay difficult to access by land. It takes the name from a rock which broke away from the high calcareous cliff. It has the appearance of a lion with flowing mane crouching on its hind legs. The beach with white gravel is protected from the northern winds but exposed to the southern winds; it is sunny in the morning hours.

This cove has several passages carved by nature. One of the passages annually hosts a couple of eagles that nest. It has a mixture of gravel that slopes rapidly towards the seabed. It is protected from the northern winds and it is sunny in the morning hours.

This bay has a pebble beach that slopes down to unexplored depths in a few meters and it can be reached only by sea.