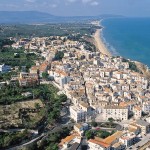 Ischitella has ancient origins. The first news of Ischitella dates back to the year 970, when the Emperor Otto I ordered its liberation from the Muslims who holed up here. A bill of Pope Stephen XIV dating back to 1058 is the first historical document in which it is named. In 1158, Ischitella had a monastery and two churches.

Different peoples and cultures have passed through its territory, from the Etruscans to the Romans, the Saracens and the Bourbons. In the period of the Norman and Swabian domination, Ischitella belonged to the County of Caserta and later it became an Angevin fief and then an Aragonese property. It is a territory rich in historical and archaeological finds. Unfortunately many of these finds have been stolen.

On the sites as "Civita" or "Niuzi", you can admire the remains of a necropolis dating back to the fifth and fourth centuries b.C.

In a document dating back to 1225, Ischitella is called "Castrum", (a fortified place), while the Ischitella name probably derives from "aesculus", ischium, through the forms of "aesculetum", "aescletum", “ischieto”. The ischium (the name is vulgar for the genus Quercus, or more specifically for the “farnetto”). In fact, the ischium is recognizable in the town’s emblem.

The entrance gates to the historic centre have an ancient origin like the town itself. The ‘Portella’ is located near the current ‘Giro Esterno’, while the ‘Porta Grande’ is present in the current ‘Sotto le Mura street’. Originally there was a third gate, called ‘Porta di Levante’ located in front of the two main streets of the old town, behind the castle, but it was demolished in 1845 in order to join the ancient town with the new town. Among the monuments to visit, there is a seventeenth-century castle; the ancient church of St. Eustache;  the convent and not far from the village there are the ruins of the old abbey of San Pietro in Cuppis, from  Pulsano.

In the historic centre of Ischitella, on the top of a high hill, the Ventrella Palace stands. Once it was called Pinto Palace and known also as Castle. The Prince Francesco Emanuele Pinto built it in 1714 on the ruins of an ancient Swabian castle that had collapsed in the earthquake of 1640. In this ancient castle, to the south there is only one tower: the grand three-story building with an impressive portal on the main façade, which is the jewel of the city.

The Prince enriched the building with a monumental façade and elegant windows, adding rooms on the first floor and raising the second floor. The ancient fortress became a stately home leaving a sign to the future generazioni. Fortunately, the fire of 1840 did not cause any damage.

THE CHURCH OF ST. EUSTACHE

It was built by the Pinto, the feudal family of Ischitella from the seventeenth century. It is located in Garibaldi Square, not far from the ex-convent of St. Francis of Assisi.

The church was once dedicated to Saint Michael the Archangel. On the facade it has two niches containing the statues of St. Eustache and San Pasquale.

You can also note in the middle, towards the top, a large rectangular window.

Inside the church you can admire frescoes by the artist Gennaro Abbate and the statues of Santa Teopista, San Teopistolo, St. Eustache and SantAgapistolo.

There is still a secret passage between the church and the ancient Pinto Palace, today Ventrella Palace.

This secret passage allowed the family to pray without leaving.

St. Eustache is the patron of Ischitella and he is celebrated on the 20th of May.

THE CHURCH OF SANTA MARIA MAGGIORE

It is the principal church. In the current era there are only the load-bearing walls and the statues of the old church of 1632. The main entrance was probably moved from the east facade to the western facade. The church has three naves and a roof with segmental arch resting on square pillare. The statue of Santa Maria Maggiore is located on the left aisle, in a niche, while the eighteenth-century wooden bust of Our Lady of Sorrows is located on another altra. The two statues date back to the seventeenth century, while the statue of the dead Christ is placed under the altar of Our Lady of Sorrows.

The wooden sculpture of Our Lady of the Assumption dates back to the late eighteenth century, and is on the right aisle.

The statues of the Apostles St. Peter and St. Paul (of the fifteenth century) are located on the front walls of the side aisles. All the other statues which are in the church, like the wooden statue of Saint Michael the Archangel, St. Raphael and the statue of St. Alfonso Maria dei Liguori, date back to the seventeenth century.

A hatch is hidden under the modern floor of the final part of the right aisle; which once allowed underground passage to a large crypt.

Inside the church the arrival of Cardinal Orsini in 1675 is still legible on a claque. Behind the walls of the church you can admire the external bell. It occupies the central part of the road axis that divides the historic centre from the first urban centre of Ischitella.