Around Vieste for an excursion in the beautiful sea caves. 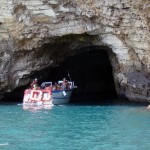 It is not easy to describe the sea caves of Vieste, and to define the beautiful scenery that Mother Nature has given to this corner of Gargano. The waters erode the earth digging deep caves, where strange shapes assumed by the rocks and the magic of colours allow the visitor a wonderful spectacle, almost fairy like.

In fact the water has been dug into the earth structure and it has been shaped at its will depending on the resistance encountered in the rock, so it has formed cavities with forms more or less extensive.

It is an incomparable gallery of numerous caves.

The first ten caves are named for their own special feature that attracted the attention of fishermen.

The first of them, just at the tip of the head, it is the ‘Grotta dei Contrabbandieri’. It has two entrances, one from the north side and the other from the south.

Above there is a ‘Trabucco’, which you reach coming down almost on all fours through an arduous path.

Another cave is called ‘Piccola Grotta Campana’ which owes its name precisely to the similar bronze of the churches.

At Campi there are three other caves:

-‘Grotta Calda’ or ‘Grotta Viola’ which owes its name to the unexplainable warmth emanated inside during the cold months and to its walls that have shades of purple;

-‘Grotta Sfondata’ when the sun hits it perpendicularly and the rays hit the water, it glows of a deep blue;

-‘Grotta due Occhi’, its eyes are the two openings at the top, almost invisible, hidden by pine trees. Its heaven is open.

At Cala sanguinaria there is ‘Grotta dei Colombi’. Perhaps, in the past, it was inhabited by pigeons.

At Pugnochiuso, there are two long caves:

-the first is called ‘Grotta dei Marmi’ because its walls are smooth and polished as marble;

-the second is ‘Grotta delle Sirene’. At ‘Cala della Pergola’, there is ‘Grotta due Stanze’ composed of two caverns, intercommunicating through two holes in the walls.

Then, there are the ‘Grotta dei Sogni’ and ‘Grotta della Tavolazza’, the first related to Eros and the love story between two “bodies”.. and the other named by the variegated colours of its walls, then, not far there is ‘Grotta Campana Grande’, sister of the smaller cave but with walls of a green bronze colour. In the Mattinata area, we find several caves to visit, their names are:

Sometimes you come to Gargano without really knowing how to move and what to visit. For this reason, we offer this guide, in which we list places not to be missed in Gargano.

Read it carefully and begin to organize your excursions in the Gargano.