The caves of Mattinata 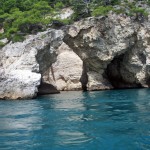 Although most of the beautiful places of the Gargano coast are completely inaccessible by road, navigating is the best way to discover all the secrets and wonders of this fascinating coast that leads from the bay of Mattinata until the charming Vieste, caressing Peschici.

The wonderful stretch of coastline from Bay of Mattinata up to Vieste is characterized by an endless succession of stunning natural scenery, creeks and beaches protected by white cliffs overhanging the sea, offering tourists a fantastic landscape. There are beautiful grottoes and numerous sea caves which have been eroded by the wind and the sea over the millennia, that adorn the rugged coast. It is not easy to describe this scenery with in the words.

These caves can be visited by hydrofoil and motorboat from the port of Mattinata, Manfredonia and Vieste during the morning hours. Rising from the east, the sun’s reflection on the sea makes these caves a delight for the eyes and for the spirit in their multiple colours. The morning hours are more favourable to visit numerous sea caves and picturesque coves.

There are numerous small bays that complete this unique and unusual coastal landscape. Many of the most enchanting places of the coast of Mattinata are accessible only by sea, and the small hidden bays can be reached only by boat. Your visit will be complete only if you spend at least a couple of hours discovering the colours of the sea in the bays and in the coves lining the coast.

You find the caves to visit, starting from the port, immediately after the promontory which is located north of ‘Baia delle Zagare’.

Entering the ‘Grotta del serpente’, at the top, in the onyx wall, there is a figure reminiscent of the cobras, making the ‘Grotta del Serpente’ perhaps the most fascinating cave. In fact for many centuries, the sea has dug a tunnel in the rock similar to a kind of reptile, from which it got its name.

It is located in the “Baia dei Campi” and the name comes from two openings that are located on the top of the cave. In front of it there is an overhanging pine tree and in the interior, on the right, there is the first eye: an opening of seven/eight meters completely hidden from other pines; while on the left side there is another bigger eye that introduces via passage on the water to an adjacent cave.

The ‘Grotta delle due Porte’ is also known as the ‘Grotta Dorata’ because its walls are illuminated by the yellow of the sun.

THE ‘GROTTA SANGUINARIA’ is located after the ‘Grotte delle Due Finestre’.

It is about 5 km from Mattinata beach, but only two km from Mattinatella beach. It gets its name from the thousands of pigeons that nest on it. It has a triangular shape and it is 10 meters wide and 70 meters long; Its height is about 40 meters.

The ‘Grotta Campana’ is so called because penetrating internally you can see a cave almost 60 meters high and is shaped like an enormous bell. It is a wonderful spectacle.

It is located 7 kilometers from Mattinatella. You can access the cave through an opening of about five meters large and with a circumference of about 250 meters.

It is a miracle of nature. A true work of art.

Getting off from the boat, a magnificent four meters wide circular beach with colourful pebbles is immediately apparent.

Inside, the cave consists of limestone blocks and around its circumference there are horizontally embedded several layers of silica or flint stone, with a red-brown colour and a thickness of about 8 centimetres.

The clear and smooth walls are covered as if there is a veil of blue patina. The sun’s rays shine them as multicolour crystal stones. At the break of dawn, it is of an incomparable beauty.

It is almost eight kilometers from Mattinata beach.

Unfortunately, the ‘Grotta dei Morti’ collapsed in the thirties of last century. Now, the only visible thing on the grotto is a rustic object with the shape of a lamppost. In fact, the fishermen used to light a candle in memory of their dead comrades because of the fury of the sea.

Today it is not visible because it collapsed in 1943 as a result of the shootings of the Allied Navy, anchored in the waters of Mattinata.

La ‘Grotta delle Fate’ is located nine kilometers from Mattinata beach. It is a cave 12 meters wide, 80 meters long and about 15 meters high, with a dazzling vault. The colourful walls are mixed with a myriad of unique colours.

Legend has it that it is the sumptuous home of fairies who decorated the nakedness of the rock with precious arabesques created patiently and with extreme delicacy during their spare time with coloured threadlike stratifications.

It is located 11 kilometres from Mattinata and it has the shape of a rectangular prism: it is from 5 to 7 meters wide, 43 meters long, and 7 meters high.

It is also known as ‘Grotta dei Pipistrelli’ for the continued presence of numerous bats that nest inside it. Its wide entrance with the shape of a corridor grows smaller when you go further inside. A show of colours so intense and varied delight the visitor's view.

It is located 11 kilometers from Mattinata.

The ‘Grotta dei pipistrelli’ is 200 meters from the ‘Grotta Campana’ and it takes its name for the continued presence of numerous bats. It has the shape of a rectangular prism: it is from 5 to 7 meters wide, 43 meters long, and 7 meters high.

It is more suggestive than the ‘Grotta Campana’ for the imaginative beauty of the colours produced by the sun's rays crashing in the morning; reminiscent the ‘Grotta delle Fate’.

Certainly there are many other small and large caves, to which no name was ever given. They cannot be defined minor caves, but have only been "neglected".