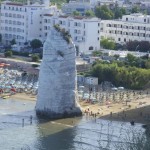 Vieste is a picturesque town, whose modern area offer bathing and hotel equipment ready to satisfy the needs of tourism and summer holiday.

It’s a must, not only to dive to its waters, but to visit its numerous caves, cliffs, reefs and wooded surroundings; in fact, the air is oxygenated by many pines, oaks, olive and other plants making the stay in these place very pleasant and relaxing.

It is located on the extreme tip of the Gargano, and it juts out into the Adriatic Sea.

The sea is a delicacy and to many tourists from Northern Europe and not only to foreign tourists, but also to Italians it is ready to offer itself, to welcome them almost dormant under the mighty Castle, built by Frederick II of Swabia.

Next to the fortress there is the Cathedral of the Basilica, of Romanesque art, built between the tenth and eleventh centuries, in the highest point of the medieval part of the town.

Entering you can find a wooden statue of Santa Maria of Merino, dating back to the fifteenth century, venerated by all the worshippers of the place.

An evocative scene of rare beauty appears in front of the visitors in the old town, descending from the top of the Castle and extending up to “Punta San Francesco”.

Continuing the visit in the old town, of ancient origins, the medieval district runs through narrow and winding streets sometimes joined by delicate arches, between white houses and pending stairs, so you enter in the spectacular district of the “Ripa”. 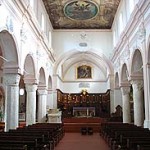 The most ancient church has a Romanesque style and is located in the upper area of the medieval village more precisely a few steps from the Swabian castle .

The date of its construction is uncertain, even if the building is attributed to Frederick II, around the year 1240, after a violent looting by the Venetians who also destroyed the cathedral. He wished to build it in honour of the “Assumption of the Blessed Virgin”.

It is in perfect harmony with the bell tower of the church, rebuilt in Baroque style, after it collapsed in 1772.

The capitals of the exterior facades show particular decorated elements (some Romanesque decorations, regarding animal heads and various types of leaves) .

The apse faces east and the entrance to the west.

Over the years, changes have been made.

The apses that initially were semi-circular, have been replaced by the Choir and two chapels.

It is built on three naves supported by twelve columns. In the central nave, on the ceiling of Neapolitan Baroque style and painted with tempera, three big canvas are placed representing the Assumption of the Blessed Virgin (after whom the basilica is named), St. Michael the Archangel protector of Gargano and St. George the patron of the town. In the two side aisles nine minor altars are arranged, six on the right and three on the left. The first altar on the right is called “of the people” or of the Mary of the Annunciation, because there is the statue of the patron Santa Maria of Merino, who according to tradition was found on the beach.

The statue was restored in Bari, in 2009, by the Superintendence of Artistic Heritage.

From 30 April to 9 May, which it is the day of her feast, the statue is exposed to the veneration of the worshippers on a throne set up in the main altar.

On 9 May, in solemn procession, the statue of the Madonna is brought from the Cathedral to the shrine of Santa Maria of Merino, 7 kilometres north of Vieste.

In the right nave there are the following chapels:

the chapel of St. Michael the Archangel, where there is a sculpture representing the dead Jesus, of the Michelangelo school;

the chapel of St. Anna, where some archaeological remains are exposed, found during the work of restoration of the cathedral, including a Lombard tomb of the eighth century;

the chapel of the Mary of the Sorrows;

the chapel of the Holy Sacrament, which was originally the terminal apse of the right aisle; here there is a canvas of 1771 representing the Madonna with the Child and the Saints.

In the left nave there are:

the chapel of the baptistery with a statue of the Virgin of the Immaculate dating back to 1756;

the chapel of St. George, with modern statues of the Archangels Michael and Raphael and relics of Padre Pio of Pietrelcina;

the chapel of the Rosary, located after the side entrance, where there is the only single-light window that has been preserved of the early Romanesque cathedral, where one of the most precious works of the cathedral is located: an altarpiece of 1581 by Michele Manchelli depicting the Madonna of the Rosary with the Saints, surrounded by 15 panels representing the mysteries of the rosary;

the chapel of the Holy Trinity, which was originally the apse which ended the left nave.

Summarizing, in the cathedral there are the following works of considerable artistic value:

-the wooden statue of the Virgin of Santa Maria of Merino;

- the canvas of Luigi Velpi dating back to the eighteenth century, depicting the Expulsion of the Avengers from the Temple;

-the wooden Choir of the seventeenth century;

- the altarpiece of the Rosary by the Genoese Michele Manchelli of 1581;

-the canvas of the Holy Trinity dating back to the eighteenth century, by Giuseppe Tomaiuolo from Vieste;

-the canvas of the Madonna with the Child and the Saints, from venetian school, dating back to the eighteenth century;

-the dead Jesus, a marble high relief from Michelangelo school.

-some archaeological remains found during the works of restoration of the cathedral, including a Lombard tomb of the eighth century.

The famous “Pizzomunno” is a big monolith, about twenty metres high.

Vieste was marred by constant attacks, especially by the Turks, in the 15th and 16th centuries.

In 1554, the famous corsair Dragut Rais beheaded thousands of inhabitants of Vieste with a terrifying looting. That assault is still remembered and that rock where the incident happened is called "bitter rock”.