House for the relief of suffering

HOUSE FOR THE RELIEF OF SUFFERING 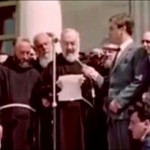 The house for the relief of suffering was officially opened on 5 May 1956. The whole world was informed of this wonderful event through prayer groups and the press. Fifteen thousand people came to San Giovanni Rotondo, and there were also many religious, civil and military authorities. His Eminence Giacomo Lercaro, as well as the Cardinal of Bologna represented the Church of Rome. Instead, the State was represented by the President of the Senate Cesare Merzagora and the Minister Giovanni Braschi. There was also the Minister General of the Order, Father Benigno from St. Ilario of Milan. After the intervention of Cardinal Lercaro, Padre Pio made a memorable speech in which he traced the guidelines of his earthly work. Padre Pio himself presented his work as the child of Providence. The following year, Padre Pio asked Pope Pius XII that after his death, the Apostolic Seat to accept in donation of all the goods of his hospital work. The Holy Father accepted his request. The hospital had two hundred and fifty beds divided in the departments of Surgery, Urology, Medicine, Cardiology, Orthopaedics, Traumatology, Paediatrics, Obstetrics and Gynaecology. There were also the services of Radiology, Laboratory Analysis and Transfusion Centre, three operating rooms and a delivery room. The day of Corpus Christi, Padre Pio took the Blessed Sacrament in procession to all departments. Sometimes he returned to visit the sick, to administer a baptism or to celebrate a mass. There were numerous charity events to which Padre Pio attended willingly. In a short time the House for the Relief of Suffering began to fill with patients who came from neighbouring towns. The hospital has currently about 1.200 beds divided among 30 medical and surgical wards, 50 clinical specialties with a “list” of about 4.300 diagnostic and therapeutic services. Departments and specializations are now over thirty, and at the beginning there were only six. Today the hospital is administered by the Vatican and is recognized as a Scientific Institute for Refuge and Care, (Decree of the Ministries of Health and of the University and of the Scientific Research of 16 July 1991), it also performs clinical and assistance activities in close contact with the Ministry of Health and with the most important Italian and European research centres and in addition it deals with clinical research, in particular in the field of genetics and hereditary- familial diseases. A modern and well equipped health centre with more than sixty specialized interventions. It was dedicated to “John Paul II”, in homage to Pope Karol Wojtyla, a devotee and friend of the Stigmatised Friar of the Gargano.

Today it makes use of other channels to inform all those who love its founder. And so a magazine was born in order to promote and provide news about the functioning of the hospital and several activities of the prayer groups. It’s called: «House for the Relief of Suffering».And to deepen the thought of the founder, there are «notebooks» of the House for the Relief of Suffering, defending the Catholic culture.

In order to cover the food subsistence, the hospital has two companies:

The farm “Calderoso” at the base of Gargano for the oil supply. And since 1984 Posta la Via, an agricultural and livestock business which is situated in front of military airport of Amendola. Its products such as meat, milk, mozzarella, cheese, yogurt, are used for the hospital, for the reception centre, and for old people’s home namely “Padre Pio’s house”.

The company Posta la Via has an agreement with the University of Foggia and it is in conjunction with the Department of Science and Veterinary Technologies for the food safety of the University of Milan. In this company several internships are held for the training of future employees in the agricultural and livestock sector and for the testing of new production techniques in the dairy sector.

Since March 2010, in the farm Calderoso, there is also an agritourism activity which allows guests to enjoy a pleasant stay in a charming Gargano and at the same time it allows them to rediscover culinary traditions and typical and genuine products; in fact, in the restaurant, meals are prepared with products from agricultural companies of the Work of St. Pio of Pietrelcina: Calderoso and Posta la Via.

For those who desire to live in the places where Padre Pio spent his life and want to nourish the soul: Reception Centre «Santa Maria delle Grazie» -Cenacle «Saint Clare» for “closed” spiritual retreat (only by reservation). For the elderly and old couples who can’t have an independent life: -Home for the elderly “Padre Pio’s house”.