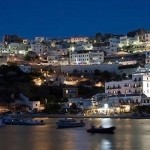 Peschici (90 metres above sea level) is on the sea dominating the beach below from the top of a promontory. It is an ancient village of fishermen and it is on a high sea cliff overlooking the sea.

From the top of the cliff, you can see to the east the beautiful and vast landscape of Vieste, St. Nicholas and Manacore, while to the west you can see San Menaio and Rodi Garganico.

Peschici owes its name to the Schiavoni, a Slavic people of Serbia who was sent to the Gargano by Emperor Ottone I in order to squash the Saracens.

The Slavic origin of Peschici is demonstrated by the name deriving from Pesclize: “Borgo on the sea”. The melodic dialect of its inhabitants is unmistakable.

It is a wonderful town and today it is almost all contained in the ancient borders. The old town is almost the same: the walls, the narrow streets composed of almost all stairs or steps and its typical houses in the rocks. Every years the traditional and picturesque old town is visited by thousands of tourists.

The castle is located in the heart of this small and characteristic town (it is a seventeenth century tower enclosed within the walls of Baron's fence), which limits the old area of the town from the new area.

In the second half of the year 1000 it was built by the Normans, while Federico II built the tower called "Imperial Rock" so the Castle found a new splendour.

In fact it is lying on top of a high rock overlooking the sea. In the period of the vice kingdom of Spain, the castle was further reinforced in order to defend against pirates who often carried out raids in these lands.

The walls are reinforced by semi-circular towers that are immediately close to the houses, from which the defences of the “Porta del Ponte” and the “Porta di Basso” stand out.

Now the castle is open to the public thanks to restoration efforts carried out in recent times. Objects and tools of the past are exposed inside. Of the ancient Castle, only the lower floor remains. There it is believed that there were arms depots, food and prisons.

You must go on foot to contemplate the panoramic views of the narrow streets of the centre and to admire the tangle of low houses with a characteristic and ingenious oriental domed roof.

In addition to the castle, you can visit:

It is located at the foot of Peschici and was probably built in the first half of the century; in fact an act of donation by the bishop of Siponto to the abbey of Tremiti definitely shows that the sacred building was existing in 1023 because most likely it was built in 872.

In 1059 it was donated to the abbots of Monte Cassino.

The churches of a vast territory depended on Calena. This territory extended all over the territory (“Tavoliere”), from Gargano to Molise. It was also contended by the powerful monasteries of Tremiti islands but it managed to remain independent until 1445, when it became property of Tremiti Abbey. During its history, Tremiti Abbey never lost his wealth and prestige. Even after 1445, Calena continued to be a must for all pilgrims going to Monte Sant'Angelo. It remained formally subject to Montecassino Abbey until the suppression of the Tremiti in 1783. Inside, there is an interesting wooden statue of the Madonna with the Child. It is an architectural jewel of the Gargano. It tells of an underground passage that lead to the rock of Jalillo and guaranteed the safety of the monks from robbers arriving by land or by sea. From a legend passed down by our ancestors, we know that a treasure is hidden with the body of one of the daughters of the Turkish Barbarossa in the Abbey of Calena (Santa Maria di Calena), (XVI century). Currently it is incorporated with the convent, in the Martucci farm.

THE CHURCH OF THE PURGATORY

The church is situated in the old town and it is also called Church of Santa Maria of the Suffrage. It was used as an ossuary by the Benedictine monks of Calena.

There is a large painting on the ceiling representing the Purgatory, Heaven and Hell, with the death and its wagon. In addition there are two skulls: one made of stone on the architrave and another made of wood located on the door.

The bell tower ends with a sail and it has two small bells, in addition to housing the only clock in the old town. Inside, the eighteenth century organ is preserved.

THE CHURCH OF MADONNA OF LORETO

The church of the Madonna di Loreto was built between the sixteenth and seventeenth century.

It is located just two kilometers from Peschici and was built in a place where the tradition has it that it appeared to a group of sailors.

As a sign of gratitude to Our Lady, the captain of the vessel built a small church shaped like a small boat. In this place, the ex-voto of sailors and fishermen are still collected as a thanksgiving to the Virgin Mary. They have a shape of boats, rowing and sailing ships.

THE CHURCH OF ST. ELIJAH

The Palace of the Tower dates back to the fifteenth century when the Church of St Elijah already existed in the sixteenth century.

After his intercession, the devout community dedicated the church to the Saint patron St. Elijah, thanking him for having freed the lands cultivated by a terrible invasion of locusts.

In the Church of St. Elijah, three Latin inscriptions are precious:

- the first is located on the Crucifix, behind the main altar;

- the other two are in the Chapel of Libetta, where there is also the inscription of the Prince Pinto of 1736 carved on the occasion of the donation of a painting.

THE BLOCK WITH THE TRACKS OF DINOSAURS.

In March 2001, evidence of the passage of dinosaurs was found on a block of the dock of Peschici. There were tracks of almost 45 centimetres. The Superintendence of Archaeological Heritage of the Apulia and the municipality of Peschici organized its removal and placement in the square of the town.

The block with the tracks is not from Peschici, but it was transported from the mining area of Apricena, many years ago. This finding is confirmed by the fact that the rocks present in Peschici are more recent than the rocks of the Cretaceous period (the period when the dinosaurs went extinct).

The discovery of the tracks is attributed to the geologists of the University of Ferrara, who also discovered the first tracks of the Gargano in the territory of San Marco in Lamis.

THE BAY OF PESCHICI

The road down to the sea with short hairpin bends offers the vision of its high coasts, alternated with stretches of golden beaches full of tourist centres. The villas are wrapped in fragrant pine woods. The coastal stretch that goes towards Vieste is also characterized by the presence of many “trabucchi” and some watch towers, which are present all along the Apulian coast. The Aragonese had built these watch towers in order to defend the coast from the attack of the Turks.

The Towers are small constructions built in strategic locations. They directly overlook the sea and served as sentries in order to defend the town from pirates and other enemies.

Among these towers, Calalunga and Monte Pucci are the most important in the territory of Peschici.

THE TOWER OF MONTE PUCCI

It was built in the sixteenth century and it is located on the border between the countryside of Gargano Vico and Peschici. The tower dominates the plain below of Calenella, the plain of Padula with the port and the promontory on which the town of Peschici stands.

It is clearly visible along the coastal road that connects Peschici with S. Menaio and Rodi Garganico. It stands above the sea, in panoramic and dominant position. It has a quadrangular base and is shaped like a trunked pyramid just like the other towers.

As usual the entrance faces upstream and is elevated in relation to the countryside level. Originally it was accessible by a retractable staircase. In the side walls there are slots. The tower has lost its original splendour and like the others in the area it has very small dimensions which reinforces the fact that it was used for vision not defence. The tower has two floors. It is directly located on a stretch of coast that faces north; this is one of the features of the Torre di Monte Pucci, so in the summer you can see the sun rise and set on the same sea.

From the tower you can see the Tremiti and the Dalmatian islands; to the east the magnificent panorama of Peschici and west you can see the village of Rodi Garganico in the distance, preceded by the long beach of San Menaio.

Near the tower there are three “trabucchi” for the fishing.

It was built in the sixteenth century and it is now a ruin.

It is located north-west of the homonymous bay and is characterized by a long beach.

Some archaeological testimonies make us realise the attraction exerted by this place on the man since ancient times. Also this tower had a typical quadrangular base and the form of a truncated pyramid.

On the rocky promontory there are the remains of a “trabucco”.

In 1570, the tower was attacked and dismantled by the Turks. Later the tower was rebuilt because of its strategic role. It is a typical tower with a quadrangular base and has the form of a truncated pyramid. Unfortunately, the tower has lost its original roof which has been replaced by a more recent one.

It is located on the promontory of Calalunga dominating to the west the tips of Manaccora and of San Nicola preceding Peschici, while to the east there is the promontory and the Usmai Tower.

The Usmai Tower is located on a small promontory on the east of Peschici between the promontory of Calalunga and the rocky coast of Sfinale.

The tower has a quadrangular base and has the shape of a truncated pyramid. The tower is accessible by a road from the coast.

The homonymous “trabucco” is a bit far from the tower and it is famous for the exceptional fishing (almost 10 tons of silver grey mullet caught in only one catch).

The “Trabucchi” characterize the coast of Peschici and they are the ingenious fishing machines, typical of the northern Gargano. There are wooden posts driven into the rocks and ropes that hold the “trabocchetto”, which is a large net deployed in the water to fish.

The “trabucco” was the main source of revenue for the inhabitants of Peschici. “Trabucco” is a dialect term that most likely derived its name from the Latin: "trabs-trabis", meaning “wood” or “beam”.