It is a very important testimony of the religious history about the Longobards of the Duchy of Benevento. There are many inscriptions that pilgrims left as traces of their passage in some areas of the Sanctuary, dating back to VII-IX century. With the Longobards Dynasty, this place became the destination of numerous pilgrims, who came through the Via Sacra Longobardorum leading to the Holy Land. Monte Sant'Angelo with Saint Michel and Saint Michael in the Alps were the outposts of ancient Christianity. The sanctuary was built on earlier works by Charles I of Anjou in the XIII century.

The current entrance, the right portal, the fourteenth-century work with arches and the attached octagonal bell tower recall the towers of Castel Del Monte. Through the Angevin staircase, made up of 86 steps and divided into 5 ramps, you can reach the underground basilica, the cave where Saint Michael the Archangel appeared and where there is the statue of St. Michael and the Episcopal Cathedral of the XII century.

The bell tower of the Basilica was a watchtower and was built by Frederick II. The tower was transformed into a bell tower in 1274, on the order of Charles I of Anjou, as a thanksgiving to St. Michael for the conquest of Southern Italy. Next to the Basilica there is the church of St. Peter, a little crumbling: its beautiful perforated rose window, where there are still remnants of the ancient church dedicated to St. Peter, of which only the shape of the apse of the Romanesque period remains. Internally, you can admire the Baptistery in the shape of an octagonal bell tower, very original architecturally, the Baptistery of San Giovanni in Tumba, known and erroneously called "Tomb of Rotari" where on its right there is the entrance that leads to the church of Santa Maria Maggiore. The church has a facade, a splendid example of Apulian Romanesque architecture, and in the lunette the Madonna Enthroned with Two Angels are depicted, but also the Empress Constance and the priest Benedict II who handled the reconstruction of the building. The church consist of three naves and is built on three bays resting on cruciform pillars that support “horseshoe arches”. The current building is covered with barrel vaults, likely the result of eighteenth-century renovations, while very original is the hemispherical cupola on the third bay of the nave. Not far from the Basilica, in the upper part of town, the Castle stands. It presents solid bastions of different ages on which stands the pentagonal tower, called the Tower of the Giants that is 18 meters high and has walls 3.70 meters thick. It demonstrates the passage of the Norman, Swabian, Angevin and Aragonese dominations . In fact, it was the residence of Ranulf, Earl of Antwerp and then of Robert Guiscard, who was responsible for the Tower of the Normans and the Treasure Room. It became an important fortress of Frederick II of Swabia, then of Manfredi and of King Conrad. The Angevins used it almost exclusively as a state prison. The Aragonese restored the castle to its ancient splendour.

The Abbey of Santa Maria of Pulsano 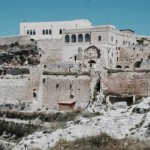 About eight kilometers from Monte Sant’Angelo, there is the Abbey of Santa Maria of Pulsano with its ancient history. Its foundation dates back to the sixth century. Damaged by an earthquake in 1646, it was built from the will of the blessed Joel, the third general abbot of the monks of Pulsano (1145-1177), on the summit of the hill of Pulsano.

Inserted in a spectacular natural landscape, between rocks and cliffs, there are also twenty-four hermitages linked by a network of narrow streets and steep trails that are almost in a state of abandonment.